Nominally, the Glass Bead Game is an idea whose roots can be found in Herman Hesse’s Magister Ludi, but I’ll cop to it right here: I’ve never read it. I picked up a secondhand copy once, but it utterly failed to grab me, and it ended up getting lost in one move or another. Perhaps I’ll give it another try sometime, but I’m not in any rush. Too many books, not enough time in life.

My introduction actually came through a very interesting (and old) website, Hipbone Games, presenting an actual Glass Bead Game based on the concept from the novel. This game is one of my favorite ideas of all times, combining an interesting game that’s curiously self-balancing with a thought exercise that is useful in almost any endeavor. Specifically, it’s incredibly useful for someone looking to run Fate, but I get ahead of myself.

The game centers around a map, but the details matter little. All that it requires is that the map be composed of spaces connected by lines. This can be as simple as a dumbell illustration or as complicated as one of those crazy cabala diagrams. Play is simple: the first player writes down something, anything, in an empty space. The next player does the same thing. They alternate until one of them fills in a space that is connected to another space by a line. 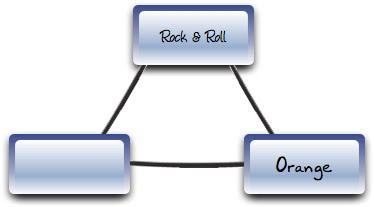 Super Simple Example
At this point, the person who just wrote comes up with a list of everything the two things have in common (if there’s more than one connection, this is done for each connection). After they finish, their opponent has the opportunity to come up with any new similarities his opponent hasn't thought of. After they’re done, each commonality is worth a point. Now, there are some potentially fiddly bits here - while you don’t necessarily need any limitations, depending on the nature of the players, some sort of time limit is usually necessary. Add one if you need it, but it’s secondary to what’s really going on here, the creation of connections between apparently unrelated things. And these connections can be pretty freaking crazy. To illustrate, consider the example of “Orange” and “Rock & Roll”. I might be able to score any of the following points:
If I could remember the name of that CD I can see SO CLEARLY that was safety orange[1] I could probably use that too, but I’m drawing a blank, so I might have to give that one away, and regret that it’s not Black, because, man, you could go nuts with that.

Anyway, It’s the kind of thing that people who see fractals underlying everything can go crazy with, but it also has a subtle twist that it favors your personal expertise, whether that’s 17th century french poetry or an encyclopedic knowledge of the members of G.I. Joe. You may not be able to draw connections between Voltaire and the Great Wall of China, but you might be able to go nuts between Optimus Prime and Jem and the Holograms. The way you think is the right way to think to play, but expanding the way you think can expand the way you play.

As a twist, you can also use found things to create the map. Rather than writing things down on the fly, you can take a stack of…well, almost anything, but cards work pretty well.[2] If the contents of the spaces are determined randomly, it changes the nature of the game again, and pushes the players even further.

And that space it pushed you to? That’s why you need to learn this game, if only to play it against yourself, for reasons that will make up much of tomorrow’s post.

1 - Safety Orange! Safety Dance! There’s another point!
2 - Though, again, it depends what you know. If I laid down the minis for various D&D monsters on the map, or books pulled off the shelf at random, I feel pretty confident some people could make a hell of a game of it.
Posted by Unknown at 10:00 AM