Ok, so before I start, I have to ask: did you learn how to play the game? You should have, and if you didn’t then this isn’t going to make a lot of sense.

The reason you want to learn the game is simple: the skills that make you good at playing the game will help make you better at designing adventures for FATE games, including the Dresden Files. The method is simple - once you start getting used to drawing connections between seemingly unrelated items, you can start applying those same skills to finding connections between aspects.

This is one of those ideas that is simple and powerful, so much so that there’s a temptation to just stop there and say “That. Do that.” because if you actually do it, odds are good its benefits will be sufficiently self evident that any explanation will seem like overkill. Still, assuming you don’t have the time to walk through it right now, let me break out an example. This is a variant on the default Glass Bead Game board: 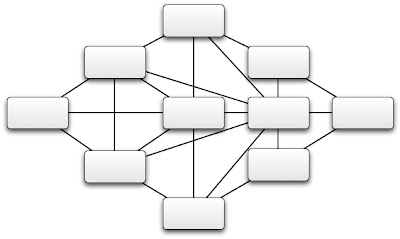 Now, let’s combine this with some aspects from the sample Baltimore characters in the DFRPG.

I’ve randomly distributed these on the grid. How is not terribly important, you can do whatever you like to spread it out. 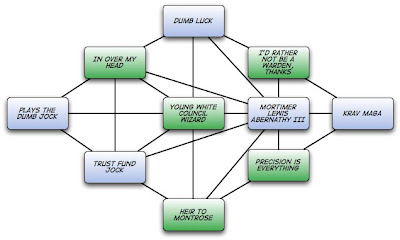 One curiosity of this particular map is it’s asymmetry - the item in the middle right is disproportionally connected to the grid, which has interesting implications when applied to adventure design - it suggests that aspect is going to be a crux of things. Something to think about when you fill in the grid for your game.

Next, let’s grab two of these and pluck the string between them to see what it makes. There are a few gimmes - Heir to Montrose and Mortimer Lewis Abernathy III are an easy pair since they suggest a range of issues about society and family and so on. To easy to even consider using as an example.

Let’s consider something a bit more challenging, like, say, Dumb Luck and Young White Council Wizard. White Council drips with hooks, but Dumb Luck’s a tricky starting point because, while it’s easy to bring up during play, it doesn’t have a lot of setting hooks, but the upside is that it’s a wildcard. If these two aspects were on the same character, it would be easy to put these two in conflict with some bit of mundane luck (like winning a lottery) drawing too much attention to his Council role, but it’s a little trickier to tie in both characters. The best bet would be to draw on Dumb Luck as an initiator - the lucky find or discovery of come sort, one that might be of interest to the council. Something that the council values or wants. If you want to introduce some tension, then you give Biff something cool that the council demands Evan take away. If you want to tie them together, then have Biff stumble upon one of the White Council’s secret’s (perhaps a way map, or something personal about a senior council member) that is personally useful, but which Evan either needs to keep concealed from the council, or Evan gets some pressure from the council to “do something” about.

Whew. Ok, that one took some work. ( This is, by the way, one more reason I like anchors - having concrete things to plug into the grid is much, much easier.) But whatever the case, it's doable, and something similar could be done with almost any pair on the grid, and I encourage you to try. But despite my saying so, you may not believe it.

It is easy to say "see the connections between these things and find potential points of intersection" but as advice goes that's only marginally more useful than "be creative." No matter how much you intellectually understand that's what you want to do, it still can seem impossibly hard.

And that, right there, is why you need to try the glass bead game. Yes, it's fun and interesting and that's great, but it's also a drill, a drill that makes you get better at seeing connections between things. Like any skill, it gets better with useful practice, but like many soft skills, practice is not easy to come by. That is, unless you can find something like the glass bead game. It's not something I can demand you do, but if seeing connections is something you want to get better at, whether to make for better games or for some other personal purpose, why wouldn't you give it a try?
Posted by Unknown at 10:00 AM