Gonna be a nerdy one today, with more noodling on the FATE Spies 3d6 mechanic (which I may need to start calling something else soon). 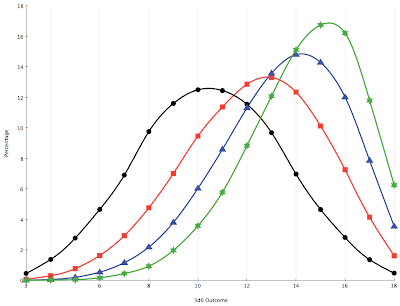 EDIT: I just noticed I didn't upload the key. Basically, the black line is a flat, familiar 3d6. Red line is 3d6 with 1 bonus die, blue is 2 bonus dice and green is 3 bonus dice. Click the image to see it in better detail.


Yeah, I was feeling a little crazy last night and wanted to see just how big an impact bonus dice had on a regular 3d6 distribution (the black line). But even so, I admit that's kind of crazy to see.

Bonus and penalty dice, for the unfamiliar, are a fairly simple mechanic I first encountered in Over the Edge. They work quite simply - when rolling a set of dice, say, 3d6, if you have a bonus die, you roll 4d6, and tally up the best three of them. If you have a penalty die, you roll 4d6 and tally up the worst 3 of them. The math is pretty easy, and so long as you're dealing with tallies that people can handle comfortable then I find it's a useful mechanic because it has a few curious attributes.

Most importantly, it doesn't change the range of outcomes, it just changes the likelihood of where a result will fall. This is a fantastic way to keep the numerical representation of the world consistent yet bounded, because the best result that can ever possibly be rolled is a known value, and you can reasonably set difficulties based on that.

This model works exceptionally well when the dice themselves represent values, as in Over the Edge (where your attributes were rated at 3d6 or 4d6) or in the newer versions of Cortex (where everything is described with a die value EDIT: as illustrated in the Leverage RPG which is out today!).[1] It is a little odd to be using it with a bonus system, as I am with the Fate Spies game, but it's proving a surprisingly good match for the relatively short skill ladder (only 4 steps, though I have a hunch 5 might be better) because the range of bonus seems large enough to tilt a roll, but not large enough to overwhelm it.

Consider, in contrast, if your roll a d20 and have a +2 bonus. Your bonus isn't going to make too much of a difference in the total value of your roll. It weights it a little, sure, but the range of outcomes is broad enough to overwhelm it. In contrast, if you have a +32 bonus, the bonus is much more telling. (Yes, this is partly math, but there are some caveats to that. But it's also about perception).

Compared to that, a +0/+2/+4/+6 set feels pretty good, especially on a 3d6 curved outcome. +2 is still enough to pretty impressively improve your odds (increases your chance of hitting a 10 by almost 25%) but is more likely to drop you in the 10-14 range (complicated success), which seems exactly right. Once you start adding bonus dice and penalty dice into this, it feels like a very potent range of options in a fairly tight package.

As a bonus, setting a hard limit on potential outcomes makes it easier to handle superhuman ones if and when they come up. If the best guy in the world's best shot is a 25 (18 + 6 + 1 point misc bonus) then I know that superhuman starts at 26 and can build from there.

Even more, it makes the game nicely compact in terms of materials. D6's are easy to come by and it's easy to get sets by color. If I'm feeling saucy, it's entirely possibly to hand out fate points[2] as differently colored d6's. Combined with the fairly minimal skill list, and the whole game kit could probably fit in an index card box. I love the physical elements of games, but I lean towards minimalism in my tastes, so I'm always thinking about what's involved in building a kit, and this may end up shaping into a true kit game.


1 - There's some similarity to Roll & Keep systems, such as L5R, but those have different benefits.

2 - Aspects in this system either grant a reroll or add a bonus die. I had worried that wasn't quite potent enough, but looking at the math, it pretty much is, but it offers no incentive for spending them before the roll. I need to decide if that's a bug or a feature. If it's a feature, ti means I'll assume it will _always_ be after the roll, and make specific narrative demands to that end.