Ok, so this is the overland map for the video game, Dragon Age: 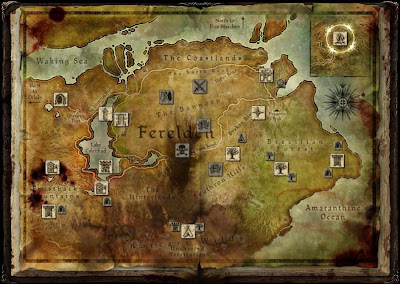 As you might expect, you click on one of the little squares to go there. The images in the icons have meanings (town, dungeon and so on - that one in the upper right is "make camp") but the base idea is pretty simple. Predictably, there are a few other twists: the map changes over time for one, and when you click to go from point A to point B, there's a chance you may have an encounter along the way.

There are similar maps within cities and such, and it works pretty well, but what I want to really look at is how this interacts with tabletop play. See, I think there's an instinctive resistance to this kind of model in play because it's so obviously and (seemingly) arbitrarily restrictive. We treasure our broad, open ended maps with the idea that if that spot right there is of particular interest to us, then by god that's what we can set out for.

The problem is that, in practice, things end up looking a lot like this map. There are points of interest the players are aware of, and more of them are revealed over time, and those are where they go too and from, encountering things along the way. The only real difference is on those occasions where the players might actually "pick a spot" that doesn't already have an icon, but when that happens, there are two possible outcomes:

1. The GM already has something prepped, so effectively it's a hidden icon.
2. The GM needs to make something up, effectively creating a new icon.

I like both options. Stuff like that is why you have a GM and not just a computer.

And, heck, it's not like this is unprecedented. Replace every icon on that map with a number and you have the map from pretty much every adventure ever. The difference between that and the video game is sleight of hand, and I wonder if we might be better off dispensing with it.

Anyway, this is obviously not applicable for all games. If you are actually interested in hard core exploration with full on Oregon Trail dysentery and inventory management, then obviously you want an open map because you're in it for the _process_. But for the rest of us, perhaps acknowledging the role of structure can help free us up to focus on whichever part of play we're actually interested in.