When I talk about video games and RPGs (and I will be talking about them some more soon), I speak from a fairly solid foundation of experience. Today, though, I am talking about something I know very little about, precisely because I know so little about it. Specifically, I'm talking about Alternate Reality Games, or ARGs.
(Note: While I always appreciate comments, I would like to especialy call out for them today from anyone who can expand on these points or who can call me out for being full of it)
These are on my mind, as many of this weeks topics are, because of their prominence in Reality is Broken. When the author is talking about games that can really change the world, these are the ones she's really talking about, games that can engage a large number of players over a geographically diverse area in pursuit of shared goals. There are numerous variations, but the basic pattern seems to be this:
It sounds very dramatic, and while there are lots of possibilities for this sort of game, its most common use at the moment is as a means of marketing a brand. What may be the most famous ARG, I Love Bees, was a big ramp up to a Halo launch. Even the altruistic games talked about in the book, such as one for the Olympics, are ultimately promotion for the sponsors.
This sounds cynical, and it maybe is, but at the same time there's a bit of harsh necessity to it. In some cases we're talking about games that will be played in a few weeks which will take over a year to prepare. That ratio seems totally off unless you can really get the kind of numbers of players to make it feel like the effort was worth it. Or, at least, so it seems.
The crazy thing is that the technologies that make all this possible potentially make it easy for a much smaller operator to do something compelling, at least with the right combination of creativity and dedication. This thought is driven into my mind by a packet I received back during the height of the recent blizzard. 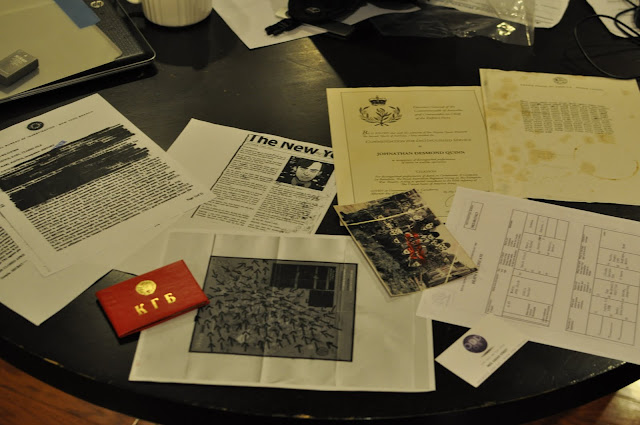 This is a packet of information for an ARG being run by Big House Comics. As a prop nerd, I'm blown away by the quality fo the work on this, but not surprised. Kevin, the guy behind this, is one of those disgustingly talented types, and he very clearly spared no effort in making the material really work. Now, I recognize a lot of the techniques that go into making this stuff, and I can tell you that you can accomplish a lot of it on a very small budget if you're willing to put in the time and work.
Obviously, you should check out BHC - I wouldn't have brough them up otherwise - but this example of a more grassroots ARG comes back to a question that has kept me from paying much attention to them: can they really get any good synergy with RPGs? Historically, I'd have said no. The scale is all wrong, the rewards are a poor match, and - to use phrase I rather liked from the book - much of it is "Real Play, not Role Play" (which is to say, you're playing as yourself, or someone very near to yourself).
But what if the bar is lower? What if the complexities of creating a good ARG have been a function of their relative novelty, and the medium is a bit more open to us down on the street. If so, that's a promising thought. The RPG community is already rich with enthusiasts and contributors - as the scads of blogs, web pages and wikis will testify - so would it be such a bad thing to engage that energy in play? As a game publisher, the prospect of an ARG in support of your game seems a reasonable scale. For a LARP organizer, it would seem only a small stretch. For an actual game, something on the scale of under a dozen people, then it might be rough, but I no longer think it's impossible.[1]
Put another way - perhaps there's another avenue for solo-yet-not-solo fun than just creating characters.
I'm going to be thinking about this one for a while. The difference between "It can be done" and "here's how to do it" is a big one, but I think it's a gap that can be crossed.
[back]1 - Thinking about it, there's some precedent. PBEM/Post games like De Profundis are already using the same infrastructure as ARGs, albeit on a small scale. Similarly, Games like the Amber DRPG have a strong streak of out-of-game contribution. These ideas are largely untapped by rpgs as a whole, but they're on the table.
Posted by Unknown at 10:00 AM