I'm not up for a full on joke post for April first, but it does seem a good day to have a serious post about a slightly silly topic: Candyland. 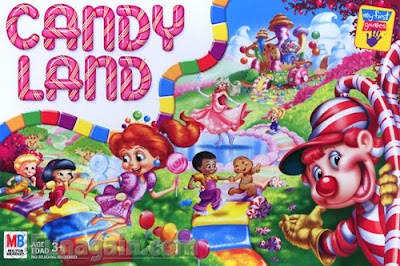 Candyland has been getting a bad rap lately. As more sophisticated games are entering the general awareness, we're getting second stage snobs who are totally excited by 'new' games like Settlers of Cataan[1] and taking this opportunity to step up and inform us all of what a terrible game Candyland is. After all, there's no play to it - you just draw cards and follow the colors and it's all dumb luck! That's a horrid game and should be destroyed!

This makes me crazy.

I like games. Not just RPGs, but games of every stripe. I have a one year old son who I am chomping at the bit to get the chance to play games with, and he's going to grow up in a household where there will be an abundance of choices. With my luck, he'll decide he hates games, but I'll deal with that when I come to it. In any case, I've already bought a copy of Candyland, and I can't wait for the day that I get to bust it out. And I've got three big reason's why.

1. Education
See, what these excited game experts forget is that there are a lot of incidental skills to playing games that are not necessarily intuitive to kids. Taking your turn, moving your piece, drawing a card and acting - these are all things that need to be learned. Yes, you can absolutely try to teach those things while also trying to teach a game with strategy (even simple strategy) but that seems like unnecessarily muddying the water. Now, you can pretend that the educational advantage of these games is something else, like color matching (or numbers in the case of Snakes and Ladders or War) but I feel that's a pretty thin argument. My kid can learn those things in lots of ways (including games) but that's not why I'm playing these games. I'm playing them to teach games in a way that is fun and which I can participate in.

2. Realization
Kids are smart, and they will eventually figure out why Candyland sucks on their own. Usually pretty fast.[2] When they do, they want more, and conveniently there's lots more available. Letting them figure this out for themselves will get way more investment than telling them ever will.

3. Hackability
My kid will learn from an early age to house rule. You want to make Candlyand more interesting? Try one of these:

None of these make it a sophisticated game, but they all change the dynamic in ways a kid can appreciate. They can even introduce new mechanical ideas that will be useful for other games. Given time, I bet we could make it pretty darn crunchy if we really wanted, but that's not the point. The point is that it shows the kid that there is more to be done with the game than maybe immediately apparent.[3]

So, in summary, Candyland teaches kids how to play, helps them realize what's not fun, and provides a platform to show how they can own their games and make them more fun for themselves. What's not to love?


1 - If you want a game that makes me crazy, it's Settlers. I'll still play it because people like it, but it's always my last choice - in my book it is a worse game than Candyland because it violates a very simple rule of game design that I have come to consider very important. In settlers, it is entirely possible to have nothing to do on your turn (and, if that happens once, it will probably happen many times). If I'm going to be sitting on my hands, then I;m uncertian

2 - I don't want it to be news to my kid that Candyland sucks when he's old enough to have their own blog or bestselling book. It's just embarrassing to watch.

3 - When I was maybe 5, I played checkers on a board that had variant rules on the back, and when I discovered this it absolutely blew my mind. The only variant I still remember was Fox and the Geese (because that one looked awesome) but the very idea that there were OTHER WAYS to play checkers was really compelling to me. Sadly, it was not compelling to many other people around me, so I never got to really try them, and instead I got to stare at the older people playing Risk, which looked awesome but incomprehensible at the time.
Posted by Unknown at 10:00 AM