When to Roll the Bones

One of the most important questions in any RPG is when you should engage the system. The precise form this takes varies from game to game, but it tends to sound like "When should and shouldn't I roll for things?". On the surface, this is an obvious and easily addressed concern . You don't want players to have to roll for everything they do, like eating lunch or walking across the room, so you only want them to roll for the good stuff. And that's where it gets a little fuzzy.

What the good stuff is tends to be a little bit handwaved in rules texts because it tends to fall under the pornography rule - people know it when they see it. And this kind of works - most GMs have a sense of when they should and shouldn't call for a roll based on what's fun for them - but it is not often examined, and that can be a problem when the dice and the sentiment at the table start to diverge. 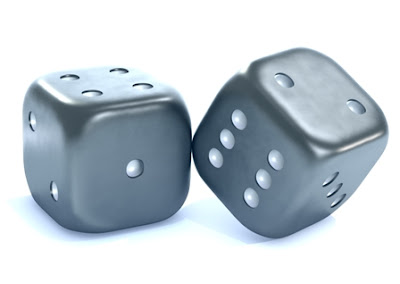 The rub is that there are at least three very different criteria for when you should engage the system, and while any game may use these in any combination, sequentially or simultaneously, being aware of these criteria can be very useful to a GM trying to figure out why a scene feels flat.

The first reason you might bust out the dice is because what the character is going to do is challenging. Because the task is hard, the dice are used to represent the chance for failure. This sort of roll can be a good way to reinforce the reality of the world because the logic of it is obvious - hard things are harder to do. It drives play by inspiring creativity from players, who will use these challenges as opportunities to use their problem solving skills to make the task easier or otherwise optimize their chances.

The second reason you might roll is because the event is exciting, which usually means that there's some risk involved in failure. This is pretty logical because excitement and risk tend to be tied to moments of high investment in what's going on in the game, and this criteria reinforces the excitement of play. It drives play by driving towards these moments of excitement, and also by hitting on our gambling bug by offering a chance at risk/reward.

The last reason you might call for a roll is because it's dramatic. This can be fuzzy because this often allows a broad disconnect between the apparent action and what's being rolled for, so let me try to pin it down a little. A dramatic event is one which will ultimately make an important decision about the game. The drama might be intensely personal (does this character love my character or not?) or it may shape the game (does the kingdom fall?) but the game is changed in some way by the outcome of this roll. This is often closely tied to the idea of "stakes" - things that explicitly ride on the outcome of a roll or scene - and can produce some weird outcome when the stakes are explicit and separate from play. It's an idea out of fiction where a scene may not be about what it's about. As an example, the scene might involve two people fighting, but the goal of one of the characters is actually to impress one of the ladies watching - is this fencing or seduction?[1] Anyway, for simplicity we'll say a dramatic roll is one that will make an important change in the game, depending on its outcome.

For purposes of illustration, let's turn to a classic situation: A player comes to a hole in the ground that he must cross. Should he roll?

So, that's all simple enough so far, and could be boiled down to "Be aware of what criteria you're using when you call for a roll" but, of course, there's a catch.

Now, I'm not saying every challenge should meet all three criteria. If everything is hard, exciting and dramatic, then that's really saying the game should be turned to 11 at all times. If that's what you want, then great, go for it, but odds are good you and your group are more comfortable with a particular sort of distribution. Think about the difference between a game that is mostly hard, some excitement and a little dramatic and one which is mostly exciting, with occasional hard and dramatic elements. Both of those are good, playable games, but they're very different in tone and flavor.

If you can figure out the proportion your table likes, then you have a super-useful piece of information for making future games more engaging.

1 - One modified by the other at my table, but this idea messes with some people because the two skills aren't physically connected.
Posted by Unknown at 10:44 AM