I was talking about this with Ryan Macklin last night and I had a moment of "huh, I should write this down" so here it is.

At Pax East, I ran a game of what can probably best be described as tabletop Final Fantasy Tactics.  Early in the con I had run a game of Cortex+ D&D that had gone well, but I'd been struck by a desire to hack it further, and the end result is something that you can still see the Cortex+ roots in, but is kind of its own beast.

One of the essential rules of this design was that everything could be done on index cards (or post-its), and the character "sheet" ended up being a set of cards, one for stats, one (eventually 2) for class, one for distinctions and one for equipment.

The stats were really the core of this, and they worked out very well, both accidentally and intentionally, and they were the result of trying to add in a few more mechanical and tactical hooks. I went with 4 stats and chose my preferred four that describe _how_ you do something rather than what you do. For the unfamiliar, they are Force (Strength, directness), Grace (Speed & dexterity), Wits (Thoughtfulness and intellect) and Resolve (Willpower and endurance).  In a narrative sense, you choose the stat that matches how you're acting, so an attack might be forceful (Hammer the guy), Graceful (Dodge around), Witty (Study the opponent, then strike) or Resolute (Wait for an opening). It's a nice, colorful set, but I wanted to jazz them up a little, which produced this: 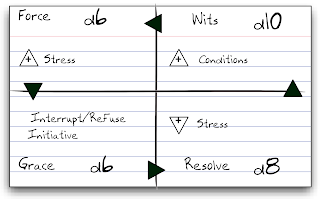 The actual dice values are, I hope, fairly self explanatory.  When taking forceful action, this guy rolls a d6. Pretty simple.

Now, before I get into the details of this, let me provide a little data on how play worked for context.  Initiative was based on the Marvel model that Fred came up with, and on your go, you took an action and chose which stat you would use as part of the roll.   Once that happened, that was the mode you operated in until your next action, which was relevant for defense rolls, and which had tactical implications that I'll explain in a minute.  The important thing is that you got locked into that mode.

Now, the other details: The black arrows represented advantage, so Force had an advantage over Grace, which had an advantage over Resolve and so on.  The mechanical upshot of this was simple - in a conflict, the stat with the advantage would step up one[1].  Thus, if this guy used Force against someone else using Grace, his D6 would be bumped up to a d8. This is not a huge bonus, but it offers an additional incentive to stat choice beyond "The best one".

The other bit is that each stat has a specific mechanical effect, taken down in shorthand on the sheet, and they break down as follows:

Force: Any stress (damage) you inflict is stepped up by one
Wits: Any conditions (non-damage) you create are stepped up by one
Resolve: Step down a stress or condition die on you.
Grace: You may interrupt initiative to take action or refuse to accept to take your turn (unless the other part is also using grace and has a bigger die).[2]


So, that makes the choices pretty straightforward. But what about the GM? You definitely don't want to keep track of all that. And so you don't - these are PC rules. For enemies, life's much simpler.

Since this was Final Fantasy Tactics inspired, most of the opposition was in the form of monsters, which were statted up pretty simply, like: 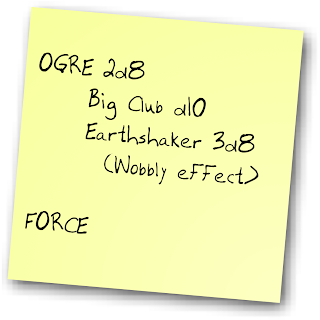 Just a few notes for a die pool, a special attack (If he used the earthshaker dice, he didn't do damage, but imposed the wobbly condition) and a note that he was a force creature, which suggested what he was strong or weak against.[3] Simpler monsters didn't have a stat at all, and boss monsters might have two that they can switch between.  Easy on the GM, but creates a broader landscape of choices (especially when there's a range of enemy stats - do you want to use wits on the ogre knowing that there's a RESOLVE Troll on the board?).

Anyway, there was more stuff with classes and gear, but I figured I'd start with the basics.


1 - "Step up" is shorthand for "Increase die size by one" so stepping up a d6 turns it into a d8. "Step down" is just the reverse


3 - In the future I might consider making this hidden information for the video-gamey reason of offering an avenue (SCAN) to finding this out. But that might also be too much work.
Posted by Unknown at 10:18 AM