I made a reference to something in comments on Friday which I realized is not an actual colloquialism, so I want to unpack it a little bit, since I think it's a powerful, useful idea.

I am not a huge jazz fan. There's some stuff I like, but it's never been that big a thing for me. I attribute a lot of that to early exposure to improvisational jazz and the fact that it was utterly terrible.

See, improvisational jazz is one of those things (like writing, and gaming) which is not hard to do, but is very hard to do well. When a novice discards form, technique and rules, he does so without the understanding of why those rules were there in the first place. The result tends to suffer greatly, and the novice is often left baffled as to why. He's not doing anything different than the old hand, so why is the outcome so different?

If you're really good at something, almost anything, you're probably nodding right now. You can encounter this phenomena in almost any field. There are a couple reasons for this. As humans, the less we know about something, the more highly we rate our own abilities[1], so that's working against us, but there's also an issue with the nature of mastery. Many, many skills follow a similar trajectory where you start out learning what to do and then, after hitting a kind f tipping point, starting to learn what not to do. 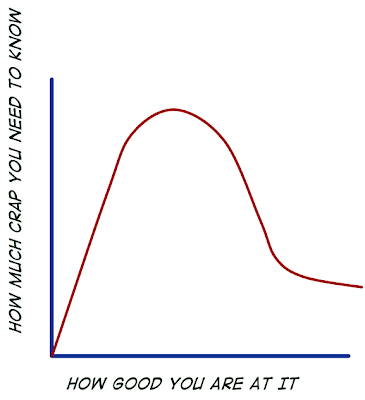 A lot of what I write is for folks who are climbing up the curve. I hope to be helpful to those on the far side of it, but I also trust them to be more capable to find what they need in my stuff without me hanging a sign on it. But it does mean that I occasionally give advice that might be really good in some situation, but REALLY BAD in your situation.

I'm not happy about that, but I'm not terribly worked up about it either. It's just one of those things that's going to happen. The best I can do is be aware of it, and hope that others recognize the same.

Anyway, to wrap this all up, when I refer to something as "Jazz Rules", I mean something that you need to learn to do before you can stop doing it.

[back] 1 - There used to be a great post about this at You Are Not So Smart, but it seems to have vanished. This sucks. Anyway, it's called the dunnin-kruger effect, and it's kind of interesting.
Posted by Unknown at 10:00 AM