I'm briefly sidetracked today by a comment on an earlier post which used a phrase I'm utterly delighted by. The poster was concerned about the variance in larger dice pools, but described it as "the mathematical whimsy of dice pool systems". That's a fantastic way to put it, and I'm totally filing that away.

But he raises a valid point, and he's not the only one to do so. Variance is a bit of a specter that has been raised more than once. For those unfamiliar, the concern is basically this: the bigger the pools of dice get, the less predictable the outcomes get. Once you're rolling 5d6, you've still got a curved outcome, but the curve gets shorter and fatter. You can see it when you map out the curves from 2d6 to 5d6, and it only gets more pronounced with time. 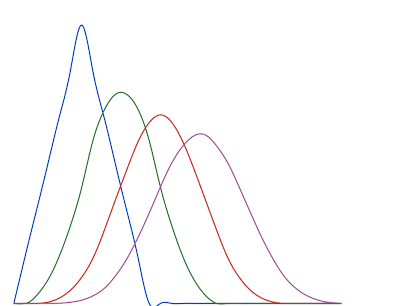 Now, this is totally a function of taste. I admit that so long as pools stay under 7d6 or so, the variance is still within my personal threshold, but I completely understand that other people's thresholds are elsewhere. The thing is that this is mostly something that math nerds are sensitive too, but gaming has no shortage of math nerds, so it's not so easily dismissed as all that.

So with that in mind, let me turn the question around a bit, and look at why we have dice in games in the first place. At heart, it's a matter of determining success or failure, with the uncertainty of things providing some of the thrill of play. Notably, that uncertainty is what puts games at a remove from pure narrative, and you can determine a lot about a game by how much of that uncertainty is in the game (determined by dice) and how much is in other sensibilities (such as drama or karma).

Now, this simple point has expanded into realms of nuance, with degrees of success and success with consequences and so on. There are piles of variations, but what's interesting to note is that there is often a divergence between results (as shown on the dice) and outcomes (how those results are interpreted). The best example of this is probably D&D, where in an attack, there are 20 possible results, but only 2 (maybe 3 with crits) outcomes.

This is an important point to bear in mind when you start looking at these die curves. It's not the specific numbers that matter so much as the bands of results. If hard rolls (13s and such) are common, then the variance starts becoming an issue - possibly a frustrating on - and that's where a lot of systems fall down. By having difficulties creep up along with die pools, you end up feeling like the treadmill is outracing you. Less consistent results combined with consistently escalating difficulties can make "high level" actions feel less heroic.

The solution to this is to take the base difficulty very seriously (Savage Worlds does a great job with this). If the target is really and truly 4 most of the time, then the big die pools feel powerful (especially when paired with the ability to "spend" unused dice). Using higher difficulties to represent specific circumstance is useful as a tool to manage exceptions, not as the default.
Posted by Unknown at 10:00 AM