There was an interesting question put forward in the comments yesterday that got me thinking about the structure of adventures. I was talking about goal-based vs. procedural adventures, and a commenter asked what these categories are. I had never given it much thought, so I chewed on this a bit to try to figure out what categories there might be.

The thing that surprised me is that there were fewer than I expected. Sticking within the bounds of more normal adventures, which is to say I'm excluding meta-play adventures, where the player's role is more akin to an author, and with those aside, there are three big categories - Situational, Procedural and Goal oriented. They're not exclusive (more on that in a minute) but they have different priorities.

Situational play centers around characters inserted into an already-detailed situation, whether dynamic or static, and bouncing around within it, observing, interacting, and often changing the rest of the situation. The GM tends to do a fair amount of work up front, and then depend up skills of improvisation to keep the situation feeling realistic and compelling. A game like Amber, which revolves around the machination of an extended family is a good example of a situational game.

Procedural play is based on the the idea of sequential events, strung together to create a coherent chain of events (or, if you're feeling risky... a story). The GM needs to do a fair amount of prep for this as well, but it's more focused than that for situational play - if you imagine Situational design as a large box full of stuff, procedural play is a series of smaller boxes. It's easier to come up with a procedural game, but the situational material is more reusable. Mysteries are great examples of this.

Goal oriented play is, as the name suggests, centered around a goal the players are looking to accomplish. The framework around the the goal might be loose or structured, but the goal is always the thing that drives play. Leverage is almost purely goal oriented - without a goal, the game doesn't work well.

Knowing these approaches can help prevent confusion when you want to run a game, since these approaches also speak to player expectations. When a player anticipates a situation game, where he's going to have a lot of freedom to wander towards whatever shiny object catches his attention, he's going to get very frustrated if the GM is expecting procedural play.

Now, by themselves, these three elements create a a very limited picture of what's really going on in play. While they are practical methods of play, very few games are going to be purely one thing or another. These ideas inform play, but you start seeing more interesting things in between them, where these ideas combine, and where this: 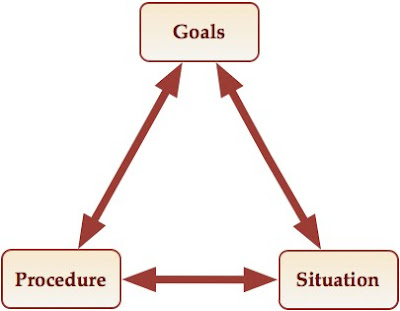 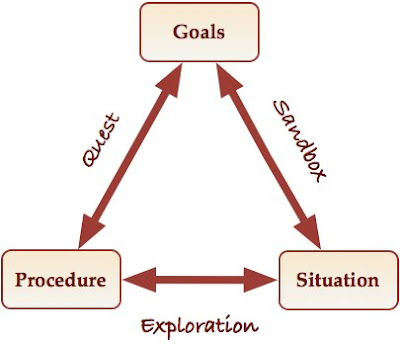 So what are those three new categories? Stay tuned!
Posted by Unknown at 10:00 AM