A Cool Thing on Monday: Rollabind

I am a bit of a notebook nerd. I mean, yes, I'm a nerd of many stripes, but office supplies are one of my great weaknesses. I can cheerfully compare the virtues of a Moleskine vs. Miquelrius vs. Rhodia vs. Picadilly far beyond the interest of most folks. This is occasionally a problem (specifically a storage problem) but it dovetails well with a lot of my other interests.

One thing I've been using for over a decade is the Rollabind system, and it's so incredibly useful that I keep coming back to it. It's a binding system that makes for a nice alternative to three-hole punch. It uses a series of rings along the binding that makes it easy to add and remove pages, but also allows the whole document to open and close easily like a notebook without the weird angles that comes from putting things in a binder.

It's a little difficult to visualize, but an illustration should clarify it. the paper is punched like so: 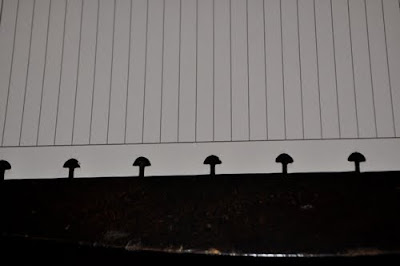 You then put a plastic ring in each groove, and the whole thing is bound up like so: 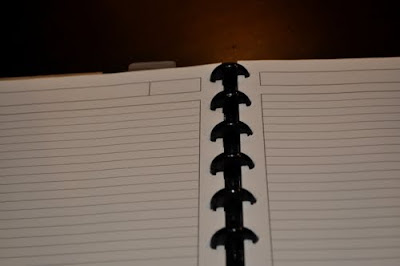 From the side, it closes up to look like this. 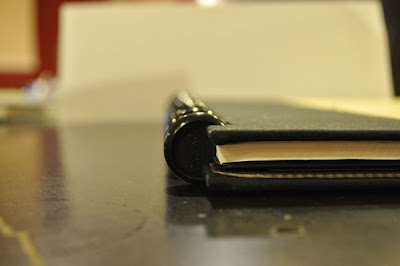 Bottom line, you get repositionable pages, like you have with a three ring binder, but with the slimmer, more utilitarian profile of a notebook. Plus, once you have a punch you can easily make notebooks of any size. I'm partial to punching stacks of index cards to bind them on one edge or the other, making little notebooks of them.

The benefits for RPGs are obvious. You can make quick notebooks for character sheets or for game sets. The ability to take notes up up front then move them to the back makes it easy to make for an all-purpose toolbox.

I realize this is a pretty unrestrained endorsement of rollabind, but as noted, I've been using these since the late nineties, and you have no idea how happy I am to not have to deal with shelving three ring binders.

Anyway, you can get this stuff via Rollabind on their website, though if you want to get it in stores, Staples carries it too. If you want the somewhat more swank version then you can get them via Levenger as the Circa System.[1] I should note that a lot of my enthusiasm is because I invested in a binding kit back in the day, which I probably would not have done if I hadn't seen the notebooks first-hand (Waldenbooks had some as day planners) so if you're curious, I would strongly suggest checking out a notebooks at Staples (or sometimes Target) and seeing how useful it looks to you.


1 - Myndology has a similar disc bound system but it's much more expensive and offers no real benefits, but I mention out of a desire to be thorough.
Posted by Unknown at 10:00 AM