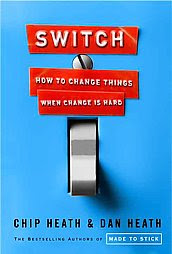 My current lunchbreak book is "Switch" by the Heath brothers who also brought us the magnificent "Made to Stick". MtS set a crazily high bar, and I'm not yet sure if Switch will clear it, but even if it doesn't it's proving an interesting and thought provoking read. [1]

One idea struck me as particularly resonant to gamers, and that revolves around why we make choices. The Heaths propose that there are two main reasons we choose to act. The first is based on consequence: we think about outcomes and choose the action that produces the outcome that is best (or least bad) for us. This is what we usually think about when we talk about decision making. The other basis is identity. Sometimes, when faced with a choice, we ask ourselves "What sort of person am I? What would that sort of person do here?" To illustrate, we buy a cookie because the pleasure of eating it is worth more than the price of buying it - simple consequence. We buy the cookie from the local baker because we like to think we're the kind of person that supports local bakers, not because we get any additional benefit from that cookie - in fact, that local cookie may even be more expensive.

That last point is the key of why this issue comes up. Identity is a very powerful way to motivate people, and in many ways is more powerful than consequences. It's something that's used to great end by local environmental causes - when they have little in the way of resources to persuade people that they should save a local animal, they have found much success convincing people that they're the kind of people who -would- save a local animal. If this isn't clicking, think about your own decisions: do you ever make decisions that are not to your benefit because that's the decision you should make? Look at your voting record - if you default to voting your party's ticket, you've done this. Ever spent too much money to buy a shirt because it has your team's logo on it? Ditto.[2]

The bottom line[3] is that identity is incredibly powerful when it comes time to actually take action and make decision. It's one of the reasons lots of things we think will help us make better decisions (like incentives or education) don't actually end up helping. It's not that we don't think littering is bad, it's that it doesn't matter enough, unless we see ourselves as the kind of people who protect the planet (or at least our region).

And that's the part that fascinated me because of this question: How do we make decisions for our characters in games?

The divide of consequence vs. dentity virtually jumps out of the question and waves its arms for attention. It's the classic divide: benefit vs. characterization. optimization vs. "What my character would do". Consequence versus Identity.[4]

And I'm not sure what to make of that. Yeah, I know, usually when I roll one of these out I've thought it through and come to some sort of conclusion, but I'm turning this over and over, and every time I do, it reveals more facets. But what I do see is this: this has been a bitterly divisive issue in gaming, but it's *bigger* than gaming, and the ways its addressed in the real world may shed some light on how we can handle it in our little corner of things.

That's my hope at least.


1 - It's had a ton of useful tidbits, but my favorite small addition to my vocabulary is "TBU", which means "True But Useless." It comes up in the context of problem solving when someone lists all the huge systemic reasons the problem exists - these may be accurate statements, but they are not problems that those speaking can usually solve, so they are distractions from focusing on what one actually CAN do. They are, thus, TBU.

2 - Peter Bregman writes about this, indirectly, and it's a story well worth a read.

3 - It's ultimately a fallacious distinction, and intentionally so, because it's illustrative. Identity, specifically how we feel about our identity, really feeds into the larger consequence decision-making engine. We feel better upholding a self-identity that makes us feel good, so it's part of the equation. However, we very rarely think about our decisions in those terms: identity and how we feel about it is a very difficult consequence to measure. As such, it is far easier to talk about as if it were a separate category of thing, so I'm comfortable with that approach.

4 - And if anyone suggests "Roleplay vs. Roll-Play" then they are in danger of spontaneous combustion via the power of my mind. That chestnut deserves to be forgotten forever.
Posted by Unknown at 10:00 AM